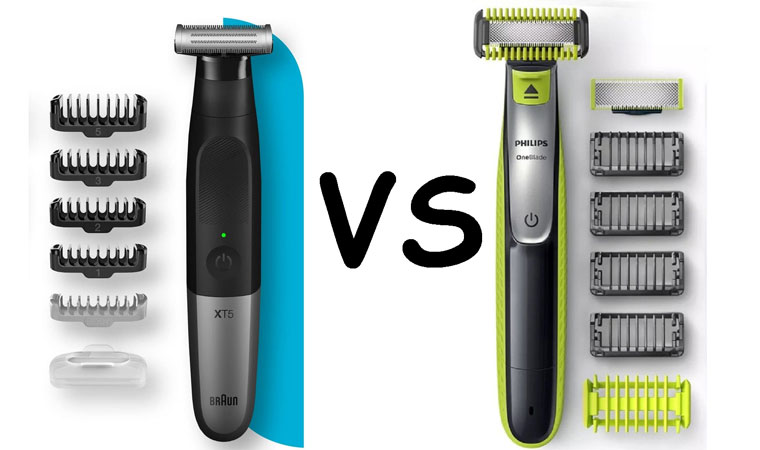 Taking into account how advanced the world is in terms of technology, activities such as body grooming, trimming, and shaving are now easier than they have ever been. And although it is easy to find a shaver that is made of top-grade materials that can ensure users to have a thorough shave regardless of the body part, the main element that highlights the outcome is one’s budget.

Before investing in an all-round shaver, it’s always best to set your budget at a high value. However, if you believe that your budget is somewhere in between or moderately generous, two options that you can take into consideration are Philips OneBlade and Braun XT5; the main highlights of this article.

Philips and Braun are elite grooming brands that produce premium quality shavers that ensure longevity, and the OneBlade and XT5 happen to be two of the many. And although the two models were created under two completely different brands, the grooming tools share multiple positive attributes that unite them as one. However, when everything is thrown into the equation, the two pieces of equipment tend to represent different mottos. Move on to the segments below to learn all the positives, negatives, and the better candidate between the Philips OneBlade and Braun XT5!

We hope the segments above are helpful enough for you to gain more awareness about all the benefits that the Braun XT5 and Philips OneBlade bring to the table for your facial and body hair, the similarities that both products share, and the differences that make one of the options better than the other. However, if you feel that you missed out on some major elements when reading through this article, remember to give yourself a thorough recap with the help of the following table. 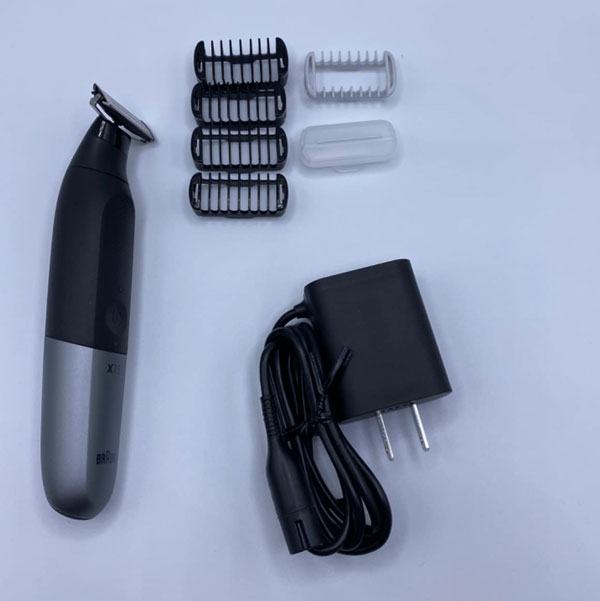 Get Braun Series XT5 at Amazon

The Braun Series XT5 is the fusion of a shaver and body trimmer that can charm you with its budget-friendly value. It comprises a 4-D blade technology which can remove hair from one’s face and body with its dual parted blades at the centre and sides, which can also move you with their lateral quickness when being used.

An impressive aspect about the Braun Series XT5 in addition to its impressive technological attributes is the durability of each blade. Typically, when maintained properly, each blade provided with the Braun XT5 can last for over 6 months. It is also waterproof, which makes shaving in the shower and cleaning the device after each shaving session a tad bit easier.

A downside of the Braun XT5 can surely be the NiMH battery that it contains. Due to the backdated battery, the XT5 only has a mediocre running time of 45 minutes without interval. However, due to the versatility and seamless movement of its flexhead, even areas that are usually difficult to clean can be trimmed with precision and bring to the table a moderately length shaving session. Get Philips Norelco OneBlade at Amazon

In contrast to the Braun XT5, The Philips OneBlade for face and body puts up a great fight. Comprising the traditional OneBlade technology, the Philips OneBlade can wipe your stubble and beard in the matter of one session. The blade is also made of materials that tend to feel generous when used on any body part, reducing the chances of suffering from inflammation, nicks, tugs, and pulls.

If you place your trust in a Philips OneBlade, then it will reward you with longer shaving sessions in which you can take your time. This is due to the Li-Ion battery it contains, which can operate and can be utilised for an hour straight.

Although the longevity of the blade isn’t as promising as that of its opponent, each blade provided with the OneBlade tends to stay in top shape for 4 long months, which could be enough for ironing out most grooming issues!

All things considered, the OneBlade can charm you with its lean build and presentable hardware, but can also leave you in awe with all its attributes when used before, during, and after taking a shower.

The Braun XT5 and Philips OneBlade are two of the most likeable body grooming tools in men’s grooming. These tools are great if you need a reliable sidekick before your trip and can also be a great companion to keep the length of your body and facial hair presentable at all times.

However, since they’re products of two different brands, both items come with a series of undeniable differences that can benefit the users, but sets them apart at the end of the day.

From rating their performance in the bathroom to examining their attributes, here are all the steps we’ve taken to settle the heated bout between the Braun Series XT5 and the Philips OneBlade!

When put to use, both candidates bring forward excellent shaving results.

The Philips OneBlade demonstrates all the promising aspects of the OneBlade technology rather flawlessly, leaving no remaining strands behind when used without a comb. The blade is also very generously built, as it can host a dry shaving session without damaging the layers of one’s skin. On top of providing users with the cleanest possible results with its waterproof blade and a powerful battery, the OneBlade also gains points for having resilient blades that can last for over 4 months!

Get Philips Norelco OneBlade at Amazon

On the contrary, the XT5 comprises a 4-D blade technology, which is constantly glorified for its quickness. The blade can glide through a scruffy beard and shorten the strands significantly over the span of minutes, which can be an incentive for those that constantly have to work around a tightly packed schedule. While the battery life could prove to be an issue for those who prefer to take it slow and steady, the blades themselves can prove to be a long term investment, as each of them lasts for 6 months at a time. 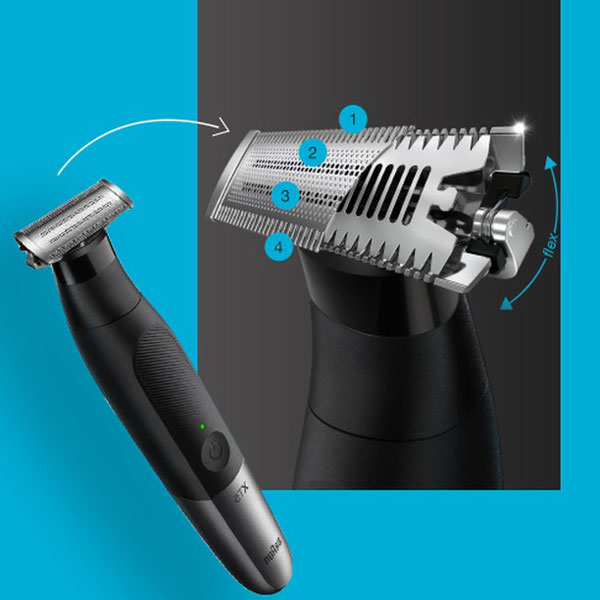 Overall, both items can be worth the time and money if you want to significantly change the shape of your beard, or get rid of them in a matter of minutes. However, despite being good at their job, the technological attributes of the XT5 and OneBlade can only give you a polished look with a stubble, not a clean shaven face.

Cosmetically, both the XT5 and OneBlade are quite astonishing and are made of premium materials. In contrast to loads of all-round trimmers, both the XT5 and OneBlade contain aesthetics that are modern and favourable. The amount of components within their build can cater to minimalists, as both of them only contain a power button, and an LED light which is placed slightly above the button. Although both lights tend to act as a battery indicator and turn green when each device is charging, the OneBlade’s LED light also turns orange when its battery is about to drain out. Get Braun Series XT5 at Amazon

The groundwork of the Braun XT5 is a bit wider and slightly bulky as opposed to the lean and narrow design of the OneBlade.

The lean build of the one blade can give users a good shave without putting in much effort due to how easily it fits in one’s hand, and can even secure a good amount of friction with its ribbed rubber gripped handle. On the other hand, while the bulky build could be an issue to fathom for those with small palms, the new anti-slip grip that the Braun XT5 contains can work in your favour if you’re a newbie who has yet to learn about the ways in which trimmers should be navigated.

A trimmer is always reliable when it can operate for a substantial period of time, and the Braun XT5 understands that assignment to the fullest. Despite containing an old-fashioned NiMH battery, the XT5 can put its precise blade to use for around 45 minutes at a time. Additionally, once it’s plugged in and charging, the battery takes around 8 long hours to reach 100%.

On the flipside, the OneBlade comes with an outstanding running time of 60 minutes, which only exists due to its Li-Ion battery. This can work wonders if you’re not good with any trimmer, as the device will give you enough time to remove hair from all the important areas, especially the ones that are hard to reach!

Since the value usually shapes the outcome of a product’s purchase, taking into consideration the difference between each product’s price tag can be a good move to make if you’re working around a budget. However, when these two are thrown into the same pool, they could end up being equally reasonable for your savings to bear with.

The Braun XT5 has a four dimensional blade technology which is also very skin-friendly and can last for 6 months. For the former attributes alone, the value of the XT5 which currently stands at $44 can very well be a bang for its buck!

On the other hand, in addition to being the product of a prominent brand, The Philips OneBlade can relieve the awkward lengths of your body hair and reduce the existence of stubborn facial hair strands efficiently with its lean build, easy handling, and renowned OneBlade technology. In addition to having a better battery life, the OneBlade is also a bit more affordable than its opponent, with a price tag of $39!

When all is said and done, users can change their lives remarkably if they place their trust on the Braun Series XT5 as well as The Philips OneBlade. Both carry a similar price tag, are an even-match when utilised for eliminating pieces of hair, and can battle the hairy issues of your body with 5 different guards.

Additionally, despite having a blade that is less durable, the Philips OneBlade can ensure successful results with its overpowered battery life, seamless movement, and the reasonable price tag it tends to carry, making it our recommended pick between the bout of Philips OneBlade vs. Braun Series XT5.

However, if the battery life isn’t necessarily your main concern and your budget is over $40 but slightly under $50, the hardware as well as software of the Braun Series XT5 can be more than sufficient to remove the awkward structure of your facial hair, and remove all the hair down there with ease! In contrast to the blades incorporated into the OneBlade, the pre-existing and replacement blades of the XT5 are considerably durable and can serve you for half a year if it’s maintained properly!