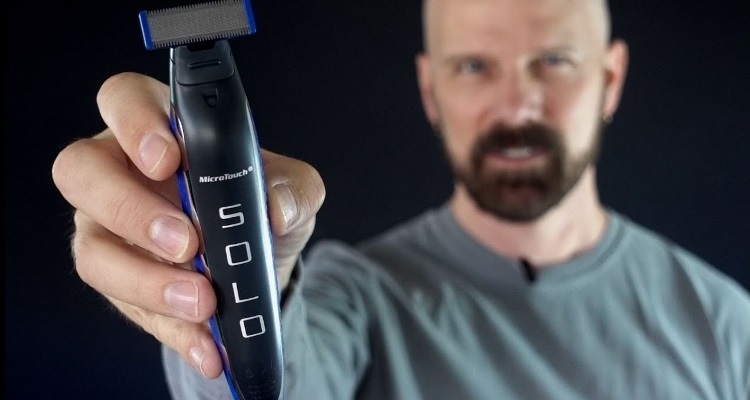 The Micro Touch Solo advertises itself as an all-in-one shaving device at a competitive price point. It sounds like a fantastic deal. But is it a dream come true or smoke and mirrors?

The name “Solo” originates in the claim that it’s the only manscaping tool you need. No matter if you’re shaving, trimming, or edging, this tool supposedly does it all.

But as the saying goes: Jack of all trades, master of none. If it does everything then maybe it does nothing well.

When I was tasked with reviewing the Micro Touch Solo, I had doubts. I wondered how it was possible a little tool like the Solo could really deliver a stellar performance across three categories.

Many shaving tools have performance problems trying to do one task. The Solo advertises it can perform three. That’s a bold statement.

I didn’t go easy on the Solo. I tested its shaving, trimming, and edging capabilities rigorously. Read on to find out if the Solo really is the last shaver you’ll ever need.

What You Get with the Micro Touch Solo

The package contains just a few accessories. Right away I imaged the Solo as a great tool for the traveling type. Its footprint in your luggage is minimal. The entire Solo bundle weighs just over a pound.

Out of the box, the Solo comes with a few attachments and other bits. They are: 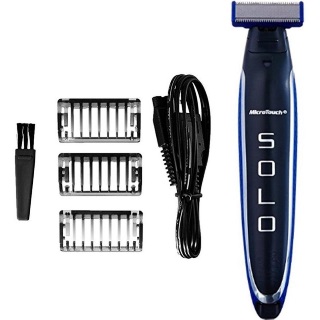 The dual-blade shaving head is made of German stainless steel, with a smooth coating over the faceplate. That way it can glide over your skin. The manufacturer states the head will last you around 4 months. Replacement shaver heads sold separately.

The packaged guides are in three sizes: 1mm, 3mm, and 5mm. They snap into place easily and seem sturdy on first impression. However, you can’t adjust the guide combs. I’ll come back to that issue later in the review.

The USB power cord is an interesting choice. It’s your average cord, but there’s no standard two-prong plug. Nowadays, almost everyone has a USB wall adapter. The choice was likely meant to save you a few extra dollars. But if you don’t have a USB capable wall port, you must purchase one separately.

You also get one small brush to clean off the Solo’s blade or guards. I rarely bother with these tiny brushes. I have a neat pile in my bathroom cabinet. Still, it’s a nice addition to the package for those that like to use them.

Get Micro Touch SOLO at Amazon

My Thoughts on the Solo as a Shaver

I’ll admit that the shaving experience of the Solo weirded me out at first. That’s because the design of the stainless-steel blade head is unusual.

When you turn on the Solo, the serrated teeth buzz back and forth. The Solo blade works the same as your typical trimmer. However, the blade cuts much closer than a trimming device I‘ve ever tested. 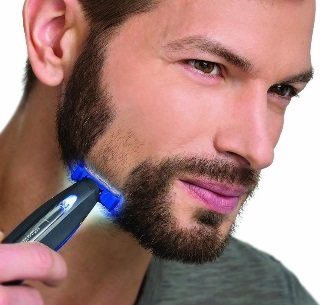 Those that fear sharp cutting blades near your face don’t have to worry. You can’t pinch yourself on the teeth. I pressed my finger directly against the blade and nothing happened.

The closeness of the shave was comparative to an electric razor five times the price. I will admit that even after two passes, it doesn’t get as close as a wet razor shave. I can’t blame this on the Solo though, as it’s not really meant to get razor-close.

If you have sensitive skin, I think the Solo provides a great alternative to more expensive electric razors.

I found the Solo shaving experience to be quick and easy. It caused no irritation. Because the serrated edge isn’t digging into your skin, you won’t have to deal with any ingrown hairs.

The blade head pivots about 30 degrees. It moves just enough to contour around your jawline and chin. I had to work my hands a little to get those tricky spots, but I do that with an electric razor, too.

I found the blade warms up, especially after two full passes. It doesn’t reach searing hot levels, just warm. The manufacturer stated it’s normal. The moving parts rub together and cause a little friction. It doesn’t irritate. It’s just something I noticed.

My Thoughts on the Solo as a Trimmer/Edger

Let’s say you’ve got a beard. Maybe you sport chin strap or a mustache and goatee combo. That means you usually need a shaver, a trimmer and an edger. How does the Solo hold up as a replacement for all three tools?

Honestly, it does just fine. 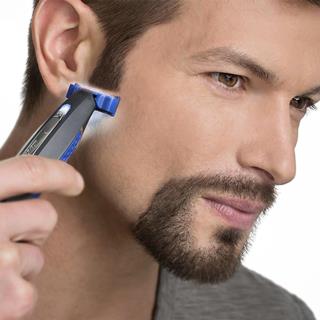 Considering the price, I’d make the trade to using a Solo. A distinct beard style requires time and often money, too. Those shavers and trimmers are expensive.

The Solo quickly switches from a shaver to an edge tool with no adjustments. All you do is use the edge of the Solo just like you would a trimmer. You can go from shaving your cheeks down along your beard to flipping over the Solo and cleaning up your sides.

Lining up your beard is easy. The little LED light installed in the device’s front helps with difficult to see areas, like under your chin or near your ear.

I found the Solo accurate and forgiving. Some edge tools mislead you on how much hair they take off. I didn’t have that problem with the Solo.

The Solo is faultless as short beard trimmer. Unlike shaving with the device, you trim your hair with the grain. It’s just the way Micro Touch designed the guide. They won’t trim as much hair if your move against the grain.

As I mentioned before, there’s just one limitation when the Solo is used as beard trimmer. Because the included guards only come in 1mm, 3mm, and 5mm you can’t trim a beard you want longer than 5mm.

You can maintain the popular three-day stubble look with the 1mm guard. And I found the 5mm guard great for honing a clean mustache suitable for the workplace.

Who is the Micro Touch Solo For?

Although anyone in need of a new shaver or trimmer can benefit from the Solo, I think two camps of men stand out as appreciating the device the most. 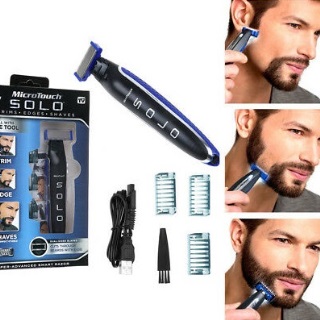 First, men who like to mix up their look. Because beards are so popular now, some of us refuse to stick to one beard style. And why should we? You only live once.

We might as well enjoy beards while they last. With the way styles come in and out of fashion, who knows how long we can enjoy facial hair before its banished as a faux pas. So, if you switch up your beard look often, I recommend the Solo.

Second, the quick shaver. Many men these days don’t like the wet shave experience. In fact, they hate shaving. For these men dropping hundreds of dollars on shaving products fills them with dread. If this sounds like you, the Solo is your next purchase.

Who is it not for you ask? Well, one group of men I see the Solo being of less than stellar value is the big beard types. If you have over 5mm of beard on your face, the Solo can’t hedge those hairy mounds of yours.

Build Quality and Thoughts after 3+ Months

The Solo is an unassuming piece of hardware. Its lightweight design took me some getting used to.

Don’t let its simple, ergonomic design fool you though. The Solo works just as good two months later as it did the first day you bought it. 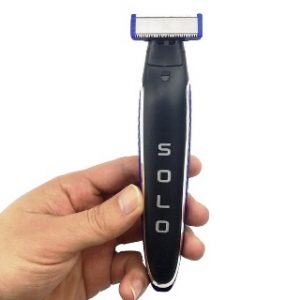 The plastic construction seems reasonable at this price point. At six inches long, the device never felt too small or bulky. Maneuvering it around my face remained an enjoyable experience throughout my review time.

I never had a problem with the lithium ion battery, either. It lasted, on average, the advertised 45 minutes of shaving time. I plugged it in every weekend and it fully recharged by the morning, about six hours.

However, the real surprise feature of the device rests in its blend of versatility and compact design. Because you don’t have to reach and grab different tools as you manscape, you save a lot of time.

I found myself more open to trying new facial hair styles, too. Since the Solo can trim and edge, I felt confident that I could pull off beard styles I never imagined attempting previously.

User’s note: I recommend clipping one of the guide combs on the device while you travel. The blade is durable, but even the strongest steel can break under the right circumstances.

Maintenance is a breeze with the Micro Touch Solo. The battery lasts about 45 minutes and takes a few hours to charge fully.

I recommend you blow off any hair that gathers near the blade as you shave, too. Since there’s only one cutting edge slicing at a time, clearing it off aids in performance.

Don’t splash water on the Solo or use any oil. It’s not like a normal trimmer or razor. Once you’re done shaving or trimming, wipe off the blade and walk away. It’s that simple.

All good things must end. Eventually, the blade will lose its sharpness. I found the blade head lasted about four months of daily use. You know when it’s time to replace the blade when the slippery surface of the faceplate loses its coating.

Blade replacement is easy. The head of the Solo pops off without a problem. You can order new heads online and snap them back into place. The heads cost less than the five-blade razor options. So, in the long run you’ll save money on heads, too.

Why the Micro Touch Solo is Worth Your Money

What Could be Better About the Micro Touch Solo

The Micro Touch Solo excels as a clever piece of shaving hardware.

It’s unassuming, lightweight, and easy to use. Like any new technology, it has its quirks. For some, the Solo’s lack of a wet shave option is a downside. No adjustable trimmer may upset men with larger-than-average beards.

But the positives far outweigh the negatives. At this price point, you will not find a tool that can adequately perform the tasks of three separate products.

I recommend the Solo for men that need an all-in-one option. If you travel a lot, or have limited bathroom storage, the Solo was made for you.

For beginner shavers, or parents hunting for a learning tool for their adolescent boy, this is a perfect device. It’s affordable, easy to use, and 100% safe.

Overall, my Micro Touch Solo review surprised me. I didn’t think the little device could handle the workload of multiple tools. I was wrong.