Choosing the best shaver isn’t an easy task. You’ll have to spend a long time looking for options, researching features, and comparing products. And if those things fail to give you a definite answer, you may have to actually invest your hard-earned money just to see which shavers will work for you.

The good news is that you don’t really have to go through all of those things. In this Norelco 9300 vs 7300 comparison review, we’ll show you the better shaver and what made us think that way.

Before that, here’s a quick look at the two models:

If you are looking for a really close shave, then Norelco 9300 is the one for you.

This wet and dry shaver can cut up to 30% closer with its V-track precision blades. The blades can also “self-sharpen” which enables them to last for about a year.

Looking closely, you’ll find 3 round cutting elements in the shaver. They can pivot in 8 different directions independently, enabling the unit to hug the various contours of your face. 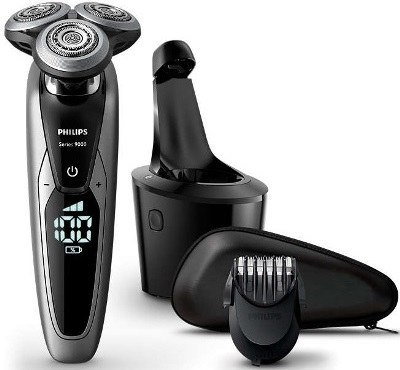 When you look underneath the outer shell, you’ll find 2 blades. They work just like your disposable razor in that the first blade lifts up the hair while the second blade cuts it at the level of the skin.

Apart from that, 9300 also has 3 different settings to match your facial hair type and skin type. The options include: sensitive, normal, and fast.

The sensitive setting works best with sensitive skin since it functions with the lowest speed setting. It’s designed to minimize irritation.

If you have normal beard growth but you don’t have sensitive skin, you can just use the normal setting. The fast setting, on the other hand, is ideal for those days when you’re in a rush.

When it comes to performance, 9300 can run for about 50 minutes or about 17 shaves. You’ll need to wait one hour for it to get fully charged. If you’re in a hurry, you can just plug it in for about 5 minutes to get enough power for a single shave. You’ll know when it’s done charging through the LED indicator you can find in its front part.

One of the things that make this model stand out is its SmartClean System.

You see, using your razor daily can cause gunk, dead skin cells, and hair strands to build up in the unit. If you don’t clean your razor properly, it can become inefficient over time. It can even put you at risk of developing infections and other skin problems.

This is where SmartClean makes the difference. It works as a charging base and cleaning unit. It can also disinfect, lubricate, and charge your razor.

To maintain it, however, you’ll need to replace its cleaning cartridges after two months. While that can sound like an additional, unnecessary expense, it’s actually not.

You can simply buy a pack of three cartridges which doesn’t cost a lot.

Another accessory you’ll get with 9300 is its traveling case. It’s a hard-shell case which protects the unit from damage when you’re traveling. It even has ventilation holes to allow your shaver to dry, preventing mold and bacteria from growing on your unit.

If you always end up with nicks and cuts after shaving, you probably need to replace your shaver with something more appropriate for your sensitive skin. Norelco 7300 is one of your best options.

7300 features comfort rings which are designed to reduce friction and irritation during shaving. Those rings enable the razor to go across the various contours of the face which is very different from foil shavers that work in straight-line strokes.

With its DynamicFlex technology, 7300’s rotary heads are able to rotate in 5 various directions. This helps lessen pinching and pulling of the hair which happens mostly with electric shavers. 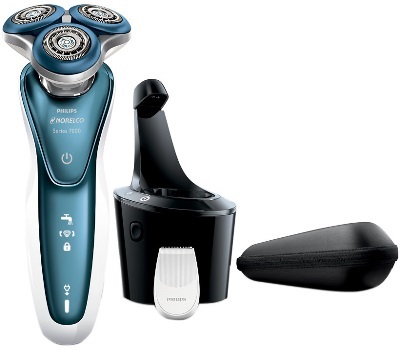 While its head can pivot 360 degrees, its cutting elements can only flex inward. That, however, shouldn’t be a problem as the shaver can still get the job done.

Similar to 9300, this unit is also great for dry and wet shaving. You can use it with a shaving cream to further minimize irritation.

7300 comes with an extra attachment you can use to groom your goatee and sideburns. It has a click-on trimmer which you can easily attach to the shaving head.

The trimmer, however, is small in size. Plus, you can’t keep it permanently attached to the shaver or store it inside the traveling case. With that, you have to be extra careful not to misplace it.

7300 relies on its 5.4 watt Li-Ion battery. It can run for 50 minutes as long as you charge it for a full hour. If you’re in a hurry or you simply forgot to charge the unit, you can plug it in for 5 minutes.

The unit has an LED display. Compared with more advanced and higher end shavers, its LED display may fall short as it doesn’t actually show how much battery life is left after shaving. You’ll only see a single bar which will alert you once the unit’s battery life is low.

Now, for the actual unit, it’s lightweight and you won’t have problems taking it with you wherever you go. Weighing just about 2 pounds, it’s easy to work with and maneuver.

Honestly, these two models have a lot of similarities which can overwhelm you if you’re not sure about what you want and need in a shaver. To help clear things out for you, below is a list of features you’ll find in both models.

7300 and 9300 work well when used for both wet and dry shaving. This is a really convenient feature for people who like to shave in the shower. Plus, it also means that you can use either model with your shaving cream or gel without causing any problems with the unit.

Both models come with a cleaning and charging system for your convenience. Their SmartClean System cleans, disinfects, dries, and charges the unit.

Both models come with a 2-year warranty.

Norelco 7300 and 9300 have LED displays which let you know what’s going on with your unit.

In 7300, you’ll only see one bar but it’s enough to let you know when the battery is getting low. In 9300, meanwhile, you’ll see a 5-bar display which is more precise.

Both models come with a really nice traveling case. It’s designed to keep your unit safe in your luggage while you’re traveling. And as added protection, their traveling cases have holes which allow the shavers to dry and remain free from bacteria and mold.

Now, while the differences between the two models aren’t that many, you still need to be familiar with them as that can help you make the right buying decision.

Check out their major differences below:

The 7300 has a more fun color. It’s blue/turquoise in color with a white outline on the edges. It looks sleek and slim.

9300, on the other hand, is mostly black with a touch of gray. It looks sleek and very pleasing to the eyes.

Norelco 9300 and 7300 are both great shavers with really similar features and accessories. However, if you really must choose between the two, then go with Norelco 7300.

The unit can give you a close shave without leaving you with irritated skin. It’s able to protect the skin while cutting short, long, and even flat-lying hairs. It features an anti-friction microbead coating which ensures a comfortable shave, even if you have a really sensitive skin.

If your skin isn’t that delicate, you can go with Norelco 9300. Its blades are self-sharpening which means that they can last for a long time.