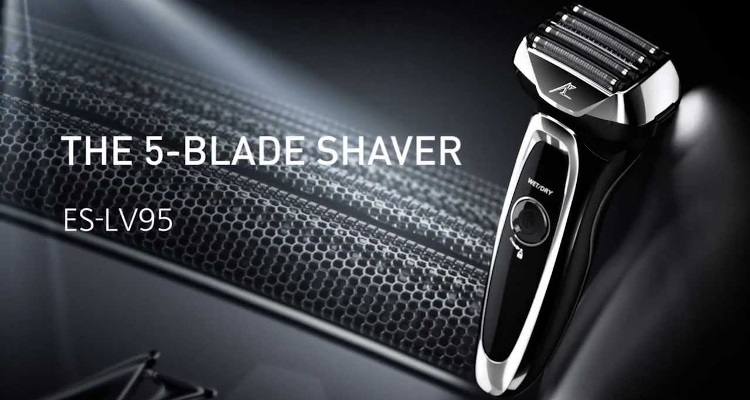 The Panasonic ES-LV95-S Arc5 is Panasonic’s flagship electric razor, and it boasts impressive features. On paper, it can easily out-perform whatever mid-grade device you’re using now. But how does it hold up to daily use?

I’ll admit I didn’t believe Panasonic’s claims. Before reviewing the Arc5, I was content with my daily 3-blade shaver. I was wrong. With electric shavers, more really is better. Below, I’ll explain in detail why you need to trade in your old shaver and never look back.

A quick overview of the Panasonic ES-LV95-S Arc5

Panasonic classes its shavers based on the number of blades. The product line ranges from Arc3 to Arc5, from 3 blade models to 5 blade models. The “Arc” isn’t just a classifier. The shavers sport a curved design rather than the usual flat design of competitor products. 5 blades is as high as the Arc series goes, and it’s higher than any other electric shaver on the market. 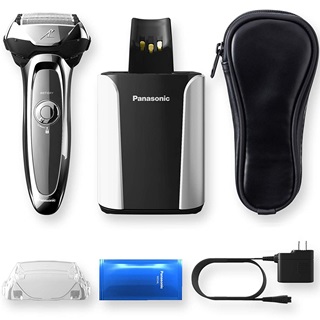 Before we get started, here’s what comes with the shaver.

The Big Question: How’s the Shave?

I’ll come right out and say it: the Arc5 delivers a fantastic shave. And it feels like a wet razor shave, the cut is that close. Here’s why. 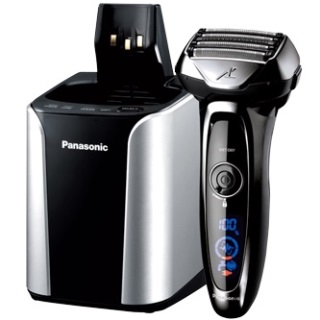 First, the 360-degree pivoting head deftly contours as you shave. This isn’t a side-to-side tilting feature like other brands that advertise a pivoting head. Its full circular motion reaches difficult spots. That tricky patch of hair under your chin? No problem.

Because of its five blades, the head takes some getting used to. It’s cumbersome and blocky. Honestly, at first maneuvering around my jaw line or near my ears proved frustrating.

It’s not the fault of the machine though, just the nature of the real estate those five blades take up. Once I got over the learning curve, I stopped noticing the size of the shaver head.

The plus side? It shaves quicker than the three-blade competition. I didn’t have to go over the same spot over and over again. What used to be a ten-minute shave I’ve cut down in half, to an average of five minutes.

My primary complaint with electric shavers is evening stubble. The number one sign of a close shave resides in how long your face remains smooth. A wet razor shave lasts me a full day. So far, the Arc5 is the only razor I’ve used that lasts just as long.

TIP: Don’t press down too hard while shaving with the Arc5. The razor works better with a lighter touch.

The Benefits of Arc5’s Blade and Foil System

Panasonic’s foil design impressed me. Five seems to be the magic number for the Arc series. The foil system is actually 4 roll-type foils and one recessed foil that guides stubborn hairs and cuts longer, gnarly whiskers.

The designers didn’t add a fifth blade arbitrarily. What’s cool is how the foils work together. The outer foil lifts troublesome hairs that the second foil cuts. I could feel the razor re-orient my facial hairs as made a pass. I often had to go over the same spot in three or four directions with other razors. At the most, the Arc5 requires two passes going the same way.

Another plus? The razor’s head isn’t one piece, but two. Composed of a foil and blade component, I can replace the foil screen without having to buy the entire replacement head.

Remember, the stainless steel screens tend to wear faster that the blades. With other leading brands like Braun, you have to replace the whole head once the foil goes. The Arc5 saves you money.

TIP: Hold the shaver head flat on your face. That way the unique 5 foil design can work its magic.

Does the Shave Sensor Work?

Writing all day and working from home, I often forget a shave once or twice a week. That’s why the Panasonic shave sensor caught my eye. Having tested it… I think it works? It’s hard to tell. 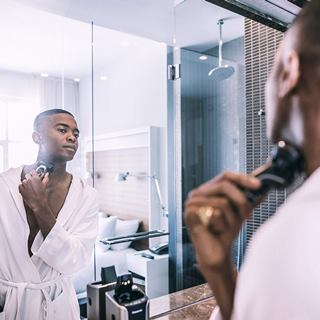 The box says the sensor adjusts to the density of your facial hair. What they mean is the linear blades speed up when the sensor reacts to thicker hair. With lighter facial hair, the blades slow down.

So, I tested the feature by shaving my face at different growth stages. A few shaves with stubble, and a few shaves with two-day growth. I found that the motor whines louder when I have more facial hair. Where my whiskers are less dense, the motor’s tone is settles down.

Like I said, it’s difficult to tell if the shave sensor helps. But I can admit that I notice fewer tugging hairs when I’m a day late to shave. With my sensitive skin I’ve yet to wince from a nasty rash because I forgot to shave one day.

With a premium razor, it has to feel good in your hand. You will be using the device every day, sometimes more than once a day. Daily use products like electric razors require a combination of ergonomics and style. This one has plenty of both. 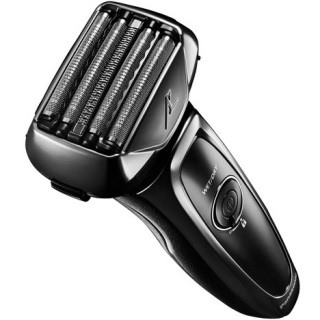 I liked the Arc5’s impressive right out of the box. From the moment I pulled off the packaging, I knew it was a top of the line model.

Made in Japan, the plastics are high grade. Unlike some razors, it doesn’t feel like it’ll shatter the moment you drop it. The silvery chrome finish shows off its high-end model. Not like the basic gray finish of the lower end models.

Gripping the razor in your hand, it feels solid and comfortable. The ergonomic palm and thumb grips etched into the back of the device mean it won’t slip out of your hand. This is especially important in a dry/wet razor because you use it in the shower.

The sound of the Arc5 is the same as other Panasonic shavers. If I close the door to my bathroom, I can barely hear the motor.

My only gripe with the build is actually a feature I mentioned earlier. I value that the foil and cutting blades on the head can be dissembled separately. But the problem is the design can make the head seem less durable than an all-in-one head, like on Braun shavers. The foil screen is flimsy when you take it off.

Still, the money you save on shaver heads is a worthwhile trade-off.

Is the Cleaning Station Worth It?

The only difference between the ES-LV95-S and the ES-LV65-S is the Cleaning Station. Panasonic does have the option to purchase an Arc5 without the station. But I recommend you get it. 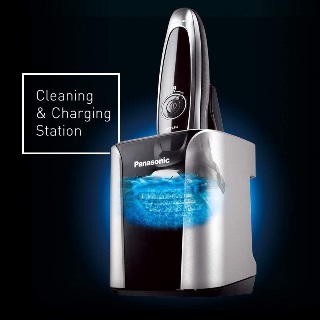 I expected the station to be a lumbering piece of plastic, something large and cumbersome. It’s not. The sleek little piece of tech fits on my bathroom shelf.

Having used the device now for a few months, I can tell you the entire cleaning process takes about an hour. When you holster the Arc5, the station runs the razor for about five minutes while it washes. Then the built-in fan dries the head for forty or so minutes. The fan runs quiet.

Maintaining the cleaning station requires some effort though. On average, the detergent needs replacing once every month or month and a half. The detergent isn’t expensive, and you don’t have to worry about using ethanol-based detergents, like the Braun cleaning stations.

Here’s the thing, you can wash the head under water. So, the cleaning station isn’t a requirement. However, drying the razor after hand cleaning can be a pain. Having done it myself with other razers, it can be difficult trying to perfectly dry out mechanic razor heads.

TIP: When you mix the detergent, use distilled water. It minimizes the chance of mineral build up in the cleaning station.

Having an LCD display on a shaver is way more useful than I thought it would be.

Some weeks, my intense work load distracts me from the simple things. The last thing on my mind is when the shaver requires cleaning, or when to replace the blades. The multifunctional display takes care of all that. 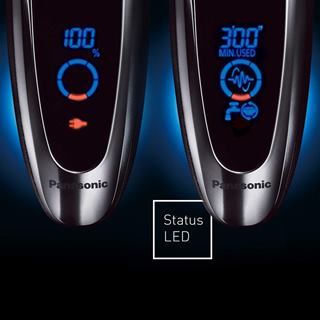 Because you can’t operate the shaver with the cord plugged in, the razer reminds you when its reached a quarter charge. The LCD screen also provides a running measure of your battery life.

Want to know my favorite feature on the LCD display? It times how long I take to shave, to a max of ten minutes. Every morning I see how quick I can be. My average time is around five minutes. Any faster and I’m egging on a case of razor burn.

The multi-voltage capable battery on the Arc5 is typical for high end electric razors. Generally, I find the razor lasts under an hour, as advertised. Because of the five blade system and LCD timer, I’ve been able to squeeze about two extra shaves per charge. A noticeable difference and its thanks to the shave timer on the LCD display.

I was hesitant to recommend a 5-blade electric shaver. It seemed like it was going too far, re-designing too much. Even so, the Panasonic ES-LV95-S Arc5 impressed me. True, there’s a learning curve with the extra blades. But the trade-off is a closer shave that lasts.

With premium shavers, you’re looking for more than just a close shave. The Arc5’s features are nearly flawless. Personally, I’d like it if the shaver came with a hard-shell case, as I’m always on the go. At this point though I’m nitpicking.

Put away that old three-blade you’re still using and buy the Panasonic ES-LV95-S Arc5. Trust me, you won’t be disappointed.