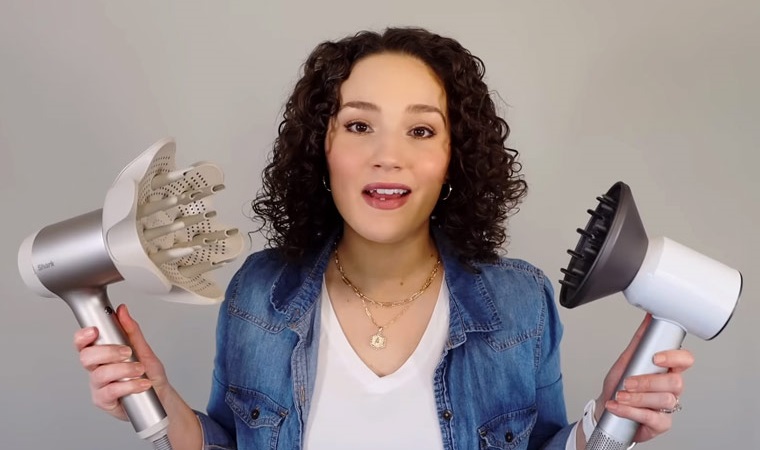 Since a successful look always requires the help of the right tools, using a hair dryer seems rather compulsory to complete that scenario. While finding a reliable hair dryer was close to finishing an improbable task back in the day, that once-difficult activity can now be as easy as drinking water due to the consistent advancement of technology.

Shark and Dyson are two big brands that mostly put their time and effort into making above-average household products and high-end hair care products. Since both brands announced their launch in the early 90s, it’s safe to call them veterans in the world of hair care. In addition to being legends, they have also given back to the community by curating great styling tools, two of which are the Shark Hyperair and Dyson Supersonic.

The Dyson Supersonic and Shark Hyperair can be great tools to invest in if you’re always working around the clock to fit in your styling routine. In addition to drying the hair by retaining moisture, both of them are not familiar with being time-consuming. And while they have many similarities when thrown into the same box, they also have various conflicting qualities that make one of the two the more desirable and ideal selection. Carry along to learn all the measures I took before picking a winner between the Shark Hyperair vs. the Dyson Supersonic!

With subsequent portions, you can quickly get access to everything that you need to know about the two candidates in this article. Additionally, if skimmed thoroughly, you can learn about all the measures I took to compare the Shark Hyperair’s qualities to that of the Dyson Supersonic. However, if you entered this article without doing any prior research on the two candidates that I’ve highlighted in this issue, don’t forget to give yourself a head start with the help of this summary overview! 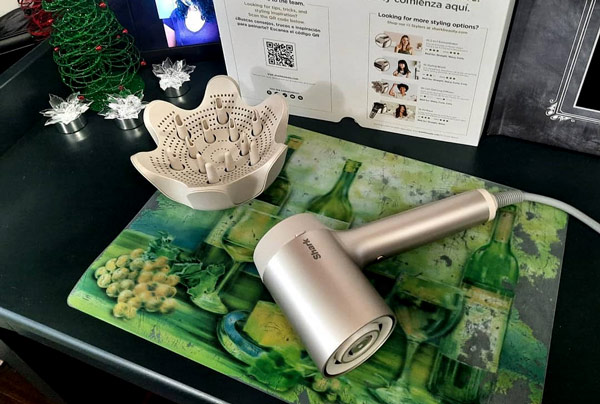 When the technical aspects are considered, the Shark Hyperair seems to be the perfect opponent for the Dyson Supersonic. It has a similar level of wattage in contrast to the Supersonic and is an even match when it comes to drying the hair without damaging the cuticles. It also contains Hyperair IQ, which uses its abilities to generate a unique heat setting for each user.

Despite being a tool that only caters to a limited amount of hair issues, the Shark Hyperair is an excellent prospect for its generous price tag, advanced performance attributes, and traditional build. While the additional tools that come with the hair dryer are known for occupying more space than expected, the Shark Hyperair is a tool that offers beginners an experience they cannot refuse with its appealing positive qualities! 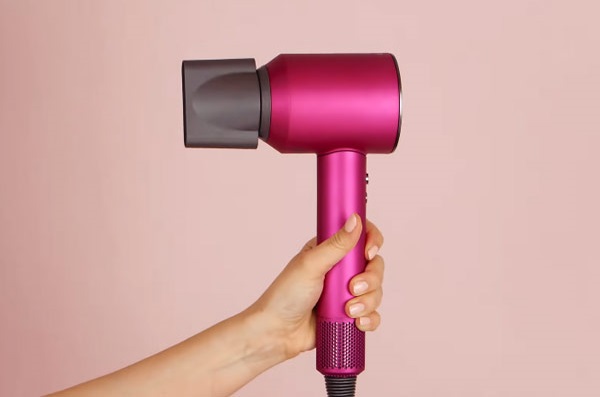 The Dyson Supersonic is what I like to call “a bang for its buck.” It makes life easier after stepping out of the shower with its quick hair-drying abilities, which can be done in a matter of minutes.

The Supersonic is also exceptional with its versatility and contains separate tools for drying the hair with volume, diffusing it with care, and sealing the moisture without flyaways. It contains Air Multiplier Technology that dries the hair without causing heat damage. It also contains Intelligent Heat Control that tracks the temperature after every second.

Although the Supersonic receives tons of heat for its relatively confusing housing and heavy price tag, the item should definitely be added to the list if you’re seeking a styling tool that will serve you for a long, long time.

Shark Hyperair Vs. Dyson Supersonic: Everything That Was Assessed To Find The Better Candidate!

As stated earlier, Shark and Dyson are renowned faces in the world of hair styling, which could also explain why they clash heads almost all the time. Additionally, since the Hyperair and Dyson Supersonic were created to dry the hair with the utmost care, a series of common  traits within their build. There were also tons of differences that were almost difficult not to notice! From examining their housing to looking into their packaging, here are all the activities I tried out before giving my two cents on the clash between the Shark Hyperair vs. the Dyson Supersonic!

Taking into account the hardware or build is not necessarily helpful when the products comprise a similar build. However, in this case, it proved to be a pivotal factor.

The Shark Hyperair comprises a build that can be recognized from miles away. In other words, it looks like an average Joe amongst hair styling tools, containing one power button right underneath the head and in between its handle. While this component could seem useless in contrast to many other options, it could be an incentive for those that prefer a traditional design, an approach that the Supersonic isn’t aware of.

Despite being as ergonomic as the Hyperair, the build of the Supersonic is designed in a completely different way. It has a hollow head and contains four buttons within its structure, all of which are placed at the back of the handle. Although the appearance of the Supersonic looks jarring and presentable due to the concentrated colour scheme, the new layout could be a dealbreaker to many. In certain cases, the new blueprint could also seem unnecessary. 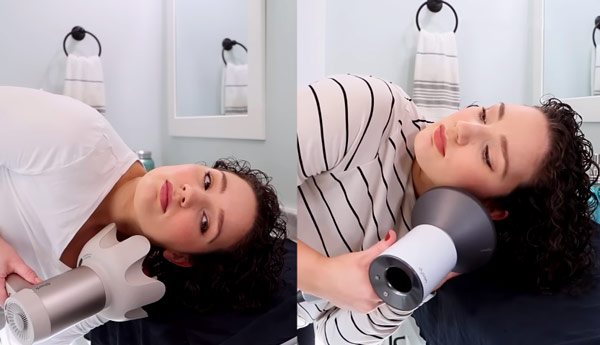 When experimenting with each product, I noticed tons of similarities at first. However, I soon started taking notes on all the differences, especially with the help of each product’s performance.

The Supersonic was easier to use physically but was a bit difficult to get used to as it comprises a different layout. However, it definitely walked the walk and kept its world after I stepped out of the shower, as it dried my hair within 2 to 3 minutes. It also left my hair feeling soft and my scalp revitalised with its Intelligent Heat Control. The Air Multiplier Technology also ensured the heat wasn’t damaging my strands indefinitely.

On the other end was the Hyperair, which wowed me away with its Hyperair IQ. Hyperair IQ is the most recent technological advancement that Shark has made to their styling tools. When put to use, it examines the hair type of the user, and picks a heat setting that won’t cause their follicles any harm.

I also liked the classic build that the Shark Hyperair contained, as it was easier to work through. However, I was still a bit dissatisfied with the limited amount of services they offered.

The Shark Hyperair is definitely a great styling tool to begin your journey with. However, the number of positives that brings to the table could become monotonous and frustrating at one point due to the limited abilities it comprises as a styling tool. In addition to drying the hair with tons of shine, the Shark Hyperair can only change the structure of your hair in a subtle way.

On the contrary, while the Supersonic is only meant to make the drying process easier, it also has multiple attachments such as a diffuser, styling concentrator, and flyaway attachment, which can give your hair the healthy finish that it needs with a little bit of flair!

When their values are measured, the Hyperair seems to have the edge over the Supersonic. As opposed to the Supersonic, the Shark Hyperair is relatively cheaper and currently stands at a price of $229. While the reason behind the significant price difference could be justified once both of them are put to the test, that matter can also be dismissed if you’d like to save a hefty amount from leaving your pockets. It can also be a great incentive to look into if you’ve recently switched from air drying to using a hair dryer, as the build is relatively simpler to comprehend.

Additionally, as of 2023, the value of Supersonic stands at $429.99. And while I can definitely vouch for the product and guarantee the positive experience it brings to the table, it would also be understandable if you perceive its value in a dark light.

When it comes to disadvantages, both items don’t contain much in general. However, if you’re about to leave your town for an indefinite period of time, try placing your trust in the lean build of Hyperair. Although it does contain chunky attachments that could take up more space than expected when packed into a suitcase, the compact and wide build of the Supersonic will probably be more hectic for you to carry around.

The price tag could also be another inconvenience that might halt the positive impression of the Dyson Supersonic, as you can easily obtain the Hyperair by spending half the amount. However, since the Supersonic is also more versatile in contrast to the somewhat one-dimensional Shark Hyperair, siding with the former could be a good decision to make in the long run!

In contrast to the Hyperair, the Dyson Supersonic can be a great tool if you want to dry your curls with a fair amount of elevation, would like to experiment with various looks on the regular, and desire attachments that are easy to handle, and even easier to put on! Although it does take a hit due to being a liability when travelling and relatively expensive, the Dyson Supersonic is still my preferred pick over the Hyperair.

As opposed to the Hyperair, the Supersonic is definitely better at drying extremely wet hair. It utilises its digital motor and wattage level to the fullest, drying the hair with tons of shine as a result. It is also comfortable to use, has more temperature settings, and won’t absorb any hair dye when being used.

Furthermore, while the Shark Hyperair does lose credibility for the flexibility it lacks as a styling tool, it definitely has a soft spot in my heart due to its generous value. When their values are measured, the Hyperair costs $200 less than the Supersonic, making it a great tool for those that are working around a budget. Since the Hyperair IQ is also known for changing the temperature settings accordingly to match one’s hair type, it can easily be the preferred pick over its opponent for beginners!