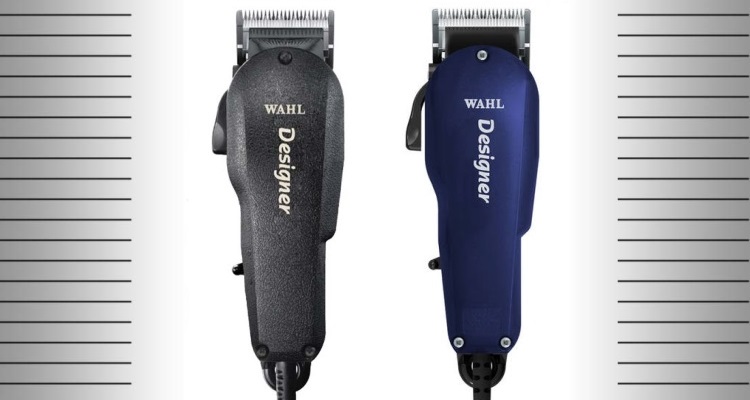 Okay, this may sound crazy, but up until now I’ve never used the Wahl Designer.

I know right? I’ve been cutting hair and reviewing clippers for years. Yet, I’ve never touched the Wahl Designer. I’ve known about it of course. I’ve seen reviews and heard barbers and consumers rave about the thing. But I hadn’t tried it. Until now.

I’ve spent a lot of time with some top Wahl clippers. I love the Wahl Senior and Pilot. And I’ve also reviewed the budget and bargain Wahl devices like the Wahl Elite Pro. When it comes to clippers, I think I have a good understanding of the Wahl brand.

Now that I have the opportunity to review the Wahl Designer, I’m curious where it fits in the spectrum of Wahl products. Does it feel peppy and smooth like the Pilot? Or is it more of a budget clipper?

Well, there’s only one way to find out. In my in-depth review, I’ll unbox a new Wahl Designer and then see what this famous clipper can do.

By the end of this review, you and I will both know if the Designer is as good as its reputation claims it to be, or if we should look elsewhere in the Wahl lineup. Let’s find out.

Look, I won’t fault Wahl for a lackluster unboxing experience. They’re not known for showing off. They’re known for showing up and getting the job done. When you slip off the cover and open the box, the layout of the items is appealing.

The Designer branding meets your eye first, smack in the middle of the package. The red comb guards and blade protector stand out, too. Red against black will always stimulate the part of me that likes flashy new things. 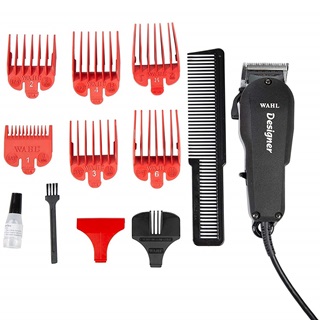 When you take out all the pieces and lay them out on a table, the haul of goods impressed me. It’s a standard list of items for a clipper, but Wahl has a penchant for adding just enough special sauce to stand out.

Here’s what you get:

The Wahl Designer bridges the gap between Wahl’s consumer line of clippers and their pricier professional counterparts. Existing in this middle ground means that the product includes their lesser versions of comb guards. You wouldn’t find them in the premium models like the Wahl Senior.

That being said, they’re still better than the guards you’d find packaged with budget clipper. Honestly, they work great for home use. And professionals buying the Designer likely have a set of thicker guards anyway. So, it’s a win either way.

Get Wahl Designer at Amazon

A Closer Look at the Wahl Designer

I’m sure by now you’ve Googled the Wahl Designer clipper and noticed that sometimes you find red and blue versions and other times this black version. That’s because Wahl updated the Designer recently. The black model is the newest model.

Aside from the color, the clipper remains the same. You still get the 5000 series electromagnetic motor, the taper lever, and six combs. Albeit the combs are a pearl color for the red and blue versions. 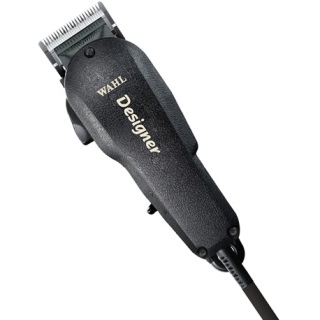 Holding the Designer for the first time, it feels like an industrial product. It’s built for use. There aren’t any consumer grade flourishes like chrome paint or rubber grip on the back plate. Wahl opted for a matt plastic finish. It feels good in the hand and has a natural grip.

I will say that, compared to their higher end products, this clipper is lighter. Weighing less than one pound, it’s nearly half that of the Pilot. The clipper’s weight is neither good nor bad.

For those of your thinking of purchasing this for at-home use, the less weight is a positive. When clipping your own hair or your family’s hair, you don’t want a heavy clipper. The weight can throw off your motions and tire you out.

The overall design is simple. The taper mechanism’s hand is on one side of the device. Adjusting the lever slides the top blade back and forth. With the taper you can close the gap of your top and bottom blades. It doesn’t reach zero-gap level close, but it’s darn close.

You can remove the top blade for cleaning, sharpening, and replacing. You’ll need a screwdriver to remove it. This new version of the Wahl Designer has a three-screw top blade rather than a two-screw top blade. The third screw is so you can adjust the blade.

Overall, I like the design. It’s not as impressive as some other clippers, but that’s not why you buy the Designer anyway.

How Does the Wahl Designer Perform?

No matter the brand behind the clipper, if the product can’t perform then it’s not worth your time. So, how does the Wahl Designer cut?

Flipping the Designer on for the first time I loved the power of the 5000 series motor. The clipper literally thuds when you click over the switch.

It isn’t as powerful as the Wahl clippers at a higher price tag. The pro line ship with the 9000 series motor. But honestly, I’ve been reviewing clippers for a while now and I can’t tell the difference between the motors, least of which by sound.

I performed a few tests with the Designer. First, I snapped on the number six guard and did some trimming. The clipper performed well. When bulk trimmer the side or the top of the head, you can’t have any snags or pulls. You also need to move quickly. At my normal pace, I found the Designer had no issue with either thick or thin hair.

Then I slid the taper lever down to its closest setting, removed the blade guard and tried to line up sideburns and the back of the neck. Remember, I’m using a stock Designer that hasn’t been zero-gapped.

As expected, the clipper reached a near-skin close cut. It’s not as clean and doesn’t hit as hard as a detail trimmer. But I didn’t expect it to, either.

From my tests, I think this device would be perfect for any fade work, at-home cutting, and even a beginner barber or one that requires a backup clipper.

The 8-foot cord is thicker than any budget clipper I’ve ever used. It’s probably the same cord Wahl installs on their professional products. I had more than enough room to work without running out of slack.

I found cleaning off the trimmer post-cut just as easy. I didn’t use the small brush that’s included but I guess you could if you needed to in a pinch. Instead, I wiped the blade off with a cloth, added a drop of blade oil, and hung it by the installed hook loop.

I think if you were to use it all day the blades have the potential to heat up. But you’d have to run the device steady for at least two hours for that to happen.

In conclusion, I was happy with how the Designer performed. It’s clear from the moment I used it why the Designer is so well known. It provides the punch of higher end clippers at a price that nearly everyone can afford.

A Look at the Extras

If there’s any part of the Designer that feels more like its budget brethren, it’s the extras. Don’t get me wrong, they work fine. But Wahl doesn’t manufacture the extras to the same standards as their professional line.

Nowhere is this more evident than the guards. Look, they work well. For those of you planning to use the Designer at home, these are great guards. I love the red color. When you clip one onto the clipper the red on black is killer. 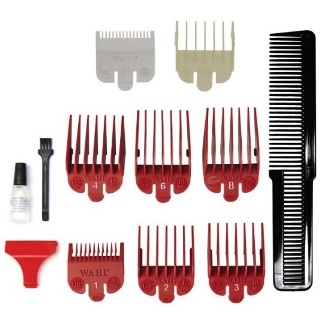 The guards, however, aren’t up to barber standards. You get six guards in the box, 1,2,3,4,6, and 8. Missing the 7 guard won’t cause too many headaches. My problem is that the teeth are a little flimsy.

I’m of two minds on the guards. One, for consumers at-home cutting their own hair or their family’s hair, it doesn’t matter. You don’t need extra durable comb guards. Two, any barber picking up the Designer should have a better and fuller set of guards. Although the quality lacks slightly I don’t think it’s too big of a deal. Plus, they look cool.

The rest of your extras are basic. The comb, such as it is, works fine. And the brush gets in between the blades and the gap near the base of the top blade. It won’t reach enough space to warrant never doing a deep clean.

I like that Wahl ships the Designer with clipper oil. Some companies have opted out of this vital addition. Clipper oil is like the lifeblood of these devices. If you neglect adding oil to your blades, don’t blame the clipper when it comes to an untimely end.

The Wahl Designer requires no more maintenance than any other clipper. You must oil the clipper blade before every use. And you must clean away any hair once you’re done using it, too.

You’ll find beep cleaning this device cumbersome because it’s a fixed blade system. Meaning you’ll need a few tools to remove the top blade and get inside the chassis to wipe out any accumulated hair.

Before doing any deeper clean, make sure to consult the instructions. The last thing you want to do is mis-align the top and bottom blades. Trust me, it hurts.

After spending a few weeks with the Wahl Designer, I must admit it impressed me. I think the Designer fits a perfect niche. It’s about as good as you can get before climbing the ladder to more expensive products.

I thought I’d miss the 9000 series motor in my Pilot, but I’m ashamed to admit I didn’t even notice the drop in power. Wahl gave consumers a top-quality clipper without the price tag.

That doesn’t mean it’s without some faults. The blades can get a little hot beyond the two-hour mark. And while cool looking, the red comb guards aren’t worth bringing into a salon.

But the meat of this device matters, and it’s great.

What I Liked About the Wahl Designer

The Wahl Designer reaches a respectable middle ground. The main components are outstanding, and I can see this clipper lasting the average consumer years, even decades.

For the professional barber or student, my verdict sways between a yes and a no. If you can’t afford the Senior or Pilot, this is your best option. But I highly suggest you pay for higher-end guards. Working all day with the included guards could wear on you.

But honestly, no one can go wrong with these clippers. Rare is the day I can recommend a product without a few caveats. The Wahl Designer is really that good. It’s dependable, cuts like butter, and durable enough to handle life at home or at the shop. If you were sitting on the fence, hop off. The Wahl Designer is worth your money.