As everyone is aware of the Braun Series 9 Pro’s expertise and latest features, the 9 Sport Series is a very underrated edition that didn’t gain much coverage on the advertisements.

You will be surprised to learn that these two shavers are oddly similar in terms of performances and design. There are minor variations that set apart one from the other, all you must do is to identify them and decide whether you really need that feature in the first place.

From my prolonged experience with these two shavers – both as a barber and as a home consumer who groomed using these units alternatively, take my insight before making your purchase.

I’ll highlight the experiential differences for you in the shape of “Braun Series 9 Sport vs Pro” format right here so that you can make a worthwhile investment and don’t end up paying extra for the services you don’t really need.

Ever wonder why these two series are significant and special from one another? What do they stand for individually? I’ll elucidate on that so that you can make the precise pick according to your needs. Braun Sport series is usually made as a lite edition to the Pro series. They share a lot of features between themselves, but the Sport variant is produced to be the affordable and consumer variant as opposed to the Pro. The shavers from this series are for regular, rough use and can be made to last for over 6 years without any major trouble. 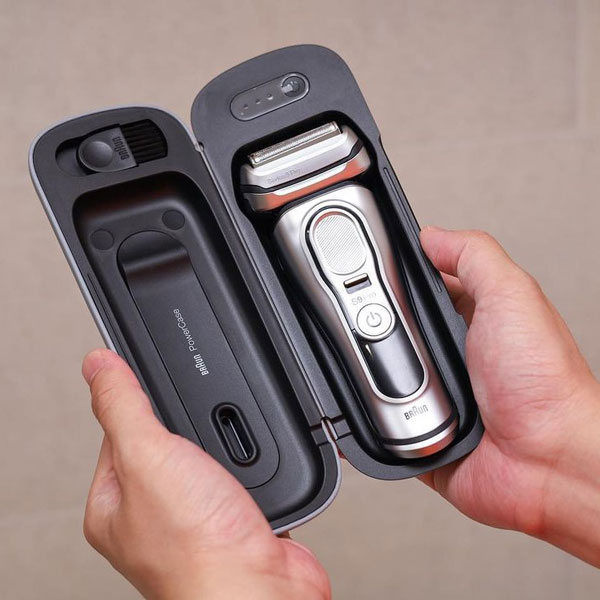 Braun Pro series is basically made for professional uses. The shavers in this series are endorsed by professional groomers worldwide as they are endowed with the latest Braun features and technology. Because of that, the price range doesn’t really bother anyone since it becomes ‘the shaver’ to have right after being released with an extended durability.

There are many similarities between the Sport and Pro variants which don’t help me highlight their key differences. That’s why I organized this Braun Series 9 Sport vs Pro battle with the areas that set them apart from one another to offer you a deeper insight into them. 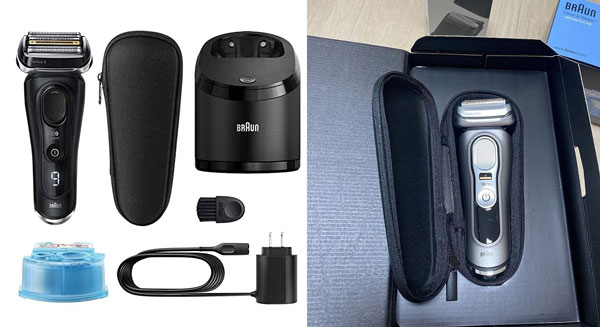 Right after unboxing each of them, my eyes picked up on the major housing difference between these two supreme shavers. The Sport is housed in matte black while the Pro fabrics a modishly silvery metal chrome color. Other than the colors, there are minor housing differences that separate the shaving experiences between them.

The most significant housing difference between these two is in their lock buttons. The Sport version has a gigantic axis lock switch at the thumb rest position, which in my opinion is actually troublesome at times. Because there have been a couple of instances when I was shaving my client and I accidentally pulled the lock right in the process.

For the Pro, Braun has actually re-configured the design and shifted the lock switch a little below the previous thumb grip position. Here, it’s a little clicky switch that doesn’t sit in the position to accidentally go on mid-shave, thus it has earned my mark for better housing design than the Sport edition. 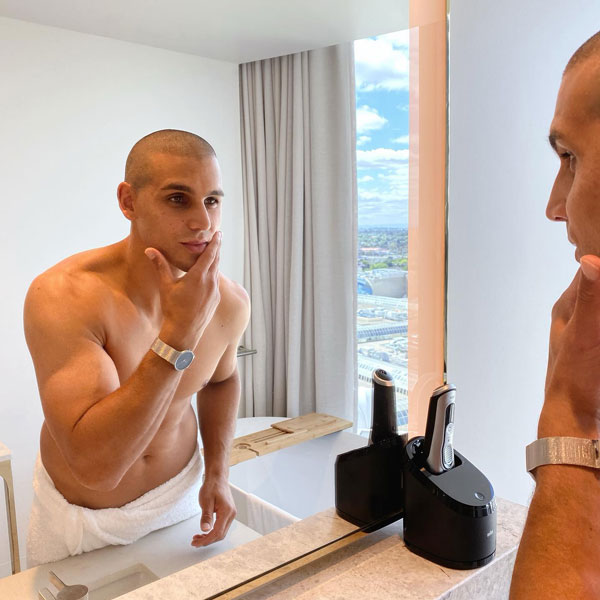 Before digging deeper into my experience with the shaving comfort for these two top-tier shavers, I feel obligated to highlight their blade type and pattern. These two units feature almost identical 4+1 blade design, two foils on each side feeding the beard to the blades and two unique ProLift trimmers sitting in the middle, one housed in a golden color that chops the hair from the root.

While these two are very similar on paper and capable of wet shaves, I’ve used both of these devices side by side on my clients and have taken them home to try out myself. I must say, despite the similarities, the Pro variant feels slightly more comfortable than the Sport variant for a couple of reasons. Let me get into details.

First and foremost, neither of these shavers will remove your beard if it’s over 5 days old, 7 days at maximum. With shorter beards, they perform very similarly in the dry conditions. But as the length grows higher, the Sport variant starts to tug quite a lot more than the Pro variant, probably it has something to do with the motor-power.

Also, if you’re sensitive to noise, then the Sport edition will annoy you a little bit more than the Pro edition. Don’t get me wrong, neither of them are loud in contrast to other shavers at this price range. But the pitch of the Sport edition is somewhat more picked up by our ears than the Pro one, which can cause certain discomfort to a lot of people.

I’ve heard mixed reviews about battery backups for both of these shavers, so I’m sharing my experience with each of them. This way, you can receive first-hand information from a professional barber who has used these units relentlessly for hours on the busiest of days and how they stacked up against one another.

I’ll get straight to the point, there’s nothing different in their battery life and I’ve found their performance to be almost identical. With a full charge before starting the day, I’ve managed to squeeze out around an hour’s runtime for each of these shavers. The Pro variant sometimes went a few minutes extra but that’s nothing to be overly impressed about as Li-Ion batteries tend to do that.

Since I’m constantly switching between shavers and trimmers, cleaning them up and charging them is something I didn’t have the time to cater to at all times. The good thing is, the charging docks that come with them can be used for either devices alternatively. From one shave to the next, I docked them and cleaned them up using the solution, which proved to be effective.

For home users, you don’t need to keep your shaver docked at all times. I’ve found both of these shavers to support me for over a week with one charge. I could even travel without the charger for both of these devices, so more room for me in the luggage! 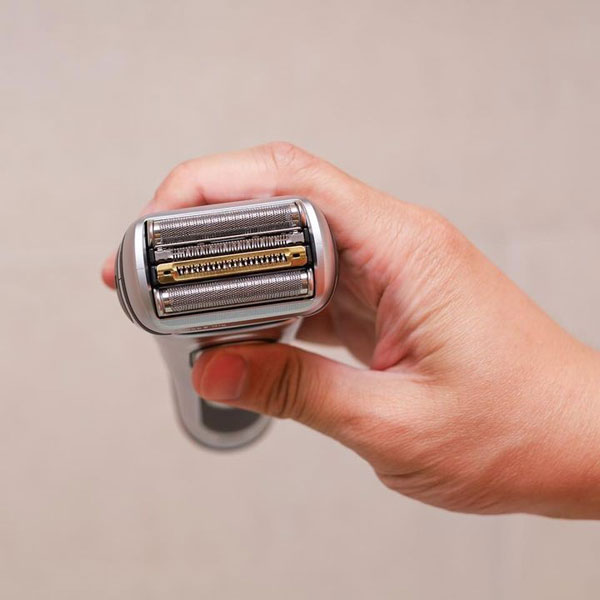 Although the housing may look similarly designed, there are certain differences in grip levels due to the materials used on them. Before going on to the details, I must say that Braun has done a grand job at producing slip-proof shaver units that didn’t betray my grip even when I had wet hands.

Other than the ergonomics of the housing, the thumb grip has gone through a significant transformation. For the Sport edition, the thumb rest is made out of rubber and it’s a better grip than on the Pro variant, which is just the plastic material with embossed grips. And those who are prone to making mistakes while shaving may have to pay a hefty price.

With that said, Sport’s thumb grip is a sensitive area as well. As I mentioned earlier, the Sport edition’s lock button is placed at that thumb grip. So no matter how fine the grip level has been, I was always overly cautious so that I don’t accidentally switch it off. It’s a mixed feeling really, that with such good grip it comes with the immediate downside.

Now it comes down to the major deciding factors to choose between electric shavers. With the experience I’ve had with the Sport and Pro versions, I’ll have to concede that these two are almost equal when it comes to shaving efficiency. For a three day beard and a good shaving preparation, they trim all of it off without leaving behind any unshaved patches.

The longer hair is dealt better with the Pro variant to be honest. Even then, any beard over a week old isn’t captured by either of them, so this is something you have to note down. These shavers are almost effortless and stand on the same front in terms of contour following and adapting to the beard’s density.

When I’m speaking of efficiency, I must highlight the battery indicator as well because that’s also a part of it. The LED indicator shows charge level at all times for both of these shavers and it’s something I’m truly grateful to have on them. For these indicators, none of these shavers died on me before running out and I could charge them in time to keep them ready for the following shave.

If I’m a tiny bit generous, then I’ll say it’s a tie between these two units when it comes to shaving efficiency for close shaving. Both of them are fast, reliable and get the job done faster than many other electric shavers of such caliber.

No matter what product we look for and how well they perform, at the end of the day it all comes down to one thing – the price. The Sport and Pro variants are priced at a significantly different range which spices up the Braun Series 9 Sport vs Pro to its peak at an instant. Why am I saying that, you may think? Let’s look at their price first.

The Series 9 Pro is priced over $300 on Amazon while the Sport variant is priced around $200. These prices aren’t constant and they change very often. But if we consider these prices now, you can see that the gap is too big to ignore. The Pro variant is a solid shaver that doesn’t feel costly at this price range as well, but the Sport’s price can’t be overlooked for having similar features to the Pro edition.

So the choice remains up to you in the end. You can either be certain that you’ll have a killer shaver and go for the Pro variant with $300 gone from your account. Or you can settle for the Sport variant with $200 which isn’t that much off in performance from the Pro – and the performance gap between them is certainly not $100 large.

Now comes the hammer time! Which one of these stand over the other at the end of this neck and neck battle? There are two answers to be frank, and let me break them down to you.

If you want the ultimate winner with the supreme capabilities that are unmatched by anyone, then the Series 9 Pro is the victor without any doubt.

It’s a grand shaver with all the latest features and advanced designs and it’s made to last longer than you can ever hope for.

However, if I must declare a winner considering the price-point along with the capabilities, then the victor is going to be altered completely.

What you’ll be getting out of the Sport variant at this price range, it’s truly remarkable. There’s no other shaver this good at such a price, and it’s almost the reflection of the Pro edition.

Thus, for a home user, I’ll suggest the Sport edition and for a professional groomer, you can opt for either of the two.